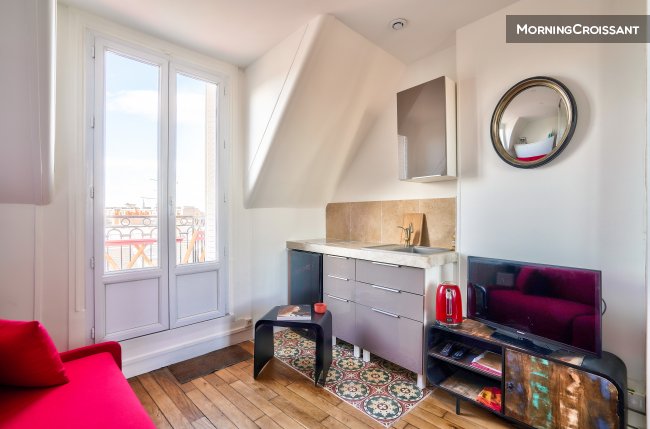 Welcome to our home!

Centrally located to enjoy everything the city has to offer!
In this apartment, up to 2 people can sleep comfortably.
The kitchen is fully equipped, with a cooking plate, fridge, kettle, and other utilities for your usage.
There is a comfy sofabed for a good night's sleep.
The bathroom is equipped with all you need for your stay.
Free WiFi is available in all areas of the apartment.
Towels and hotel-quality linens are provided for your stay.
Service is available 24 hours a day, 7 days a week for your convenience.

Charges included in the rent:

The security deposit of 500 € must be paid, before the keys are handed over, by credit card (imprint).

The district seduces as much by its lively and colorful side as by its historical heritage. Indeed, one reaches these places by the famous Porte Saint-Denis, a triumphal arch with sumptuous bas-reliefs, built in 1672 to the glory of the Sun King, Louis XIV. And while walking the streets of the district, we discover a lively atmosphere, both trendy and cosmopolitan.

In the rue du Faubourg-Saint-Denis, there is no shortage of bars, restaurants, caterers, and other grocery stores. At n ° 16, a brasserie takes place in a superb building with Art Nouveau decor classified as a Historic Monument.

Various picturesque passages also line the street, such as the Prado passage at n ° 12, the Passage de l'Industrie at n ° 42, the Brady passage nicknamed Little India at n ° 46, the Reilhac passage at n ° 54 or even the passage du Désir at n ° 84. At n ° 61 bis, it is the charming courtyard of the Petites-Écuries and its restaurants that attract visitors. After the Passage du Désir, head for rue de Paradis!

Young and old will love the Manoir de Paris, a "haunted house" installed in a former pottery factory. Thrills guaranteed! Old crystal works also take place in this typical street of the district.