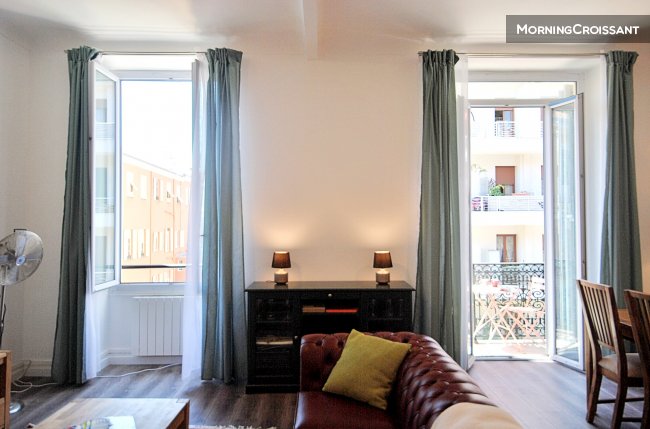 Excellent location . Our flat is located in the Carré d'Or district, rue du Congrès behind the Negresco hotel. It is 150 metres from the sea. Freshly renovated, this large 115m2 bourgeois style flat has 2 double bedrooms, one with a bed measuring 160x190 and the other with a bed measuring 140x190, as well as a room with two single beds. Nearby there are many good restaurants, bakeries and grocery shops. The public car parks "Congress", "Palazzo Massena" and "Grimaldi" are just a few steps away from the flat. The new tramway station Massena, 7 minutes walk away, will take you directly to the airport.

A deposit may be required by the landlord at the entrance to the flat.

Charges included in the rent:

The security deposit of 800 € must be paid, before the keys are handed over, by bank transfer.

In Nice, the Carré d'Or is located in the city centre, between the Promenade des Anglais and Boulevard Victor Hugo. It is bounded to the east by Avenue Jean Médecin and to the west by Boulevard Gambetta. The "Carré d'Or" in Nice has many faces; it is residential, commercial and touristic:

- The Victor Hugo district is the very example of the residential sector, with superb bourgeois buildings and beautiful gardens.

- The pedestrian zone is one of the most lively streets in Nice, with many shops, bars, pizzerias and restaurants.

- In addition to the attraction that the "Carré d'Or" represents for tourists, the area has many hotels, including the emblematic Negresco.

In terms of architecture, the Carré d'Or is very much marked "Belle Epoque", with a touch of "Art-Déco" and some more modern creations. The oldest monument is the Marble Cross which dates back to the 16th century.

Property prices in the "Carré d'Or" are among the highest in Nice, as the supply of properties there is relatively limited and rather upmarket.

No smoking in the flat
No parties allowed
Similar accomodations